Compare prices with GG.deals to find the cheapest cd key for Fantasy Grounds - D&D Classics: Demihuman Deities (2E) PC. Head over to one of the trusted game stores from our price comparison and buy cd key at the lowest price. Use the indicated client to activate key and download and play your game. 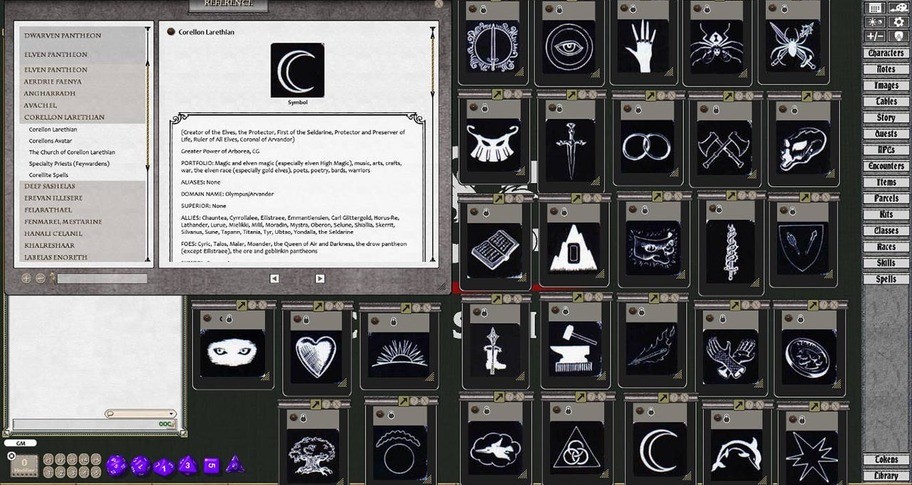 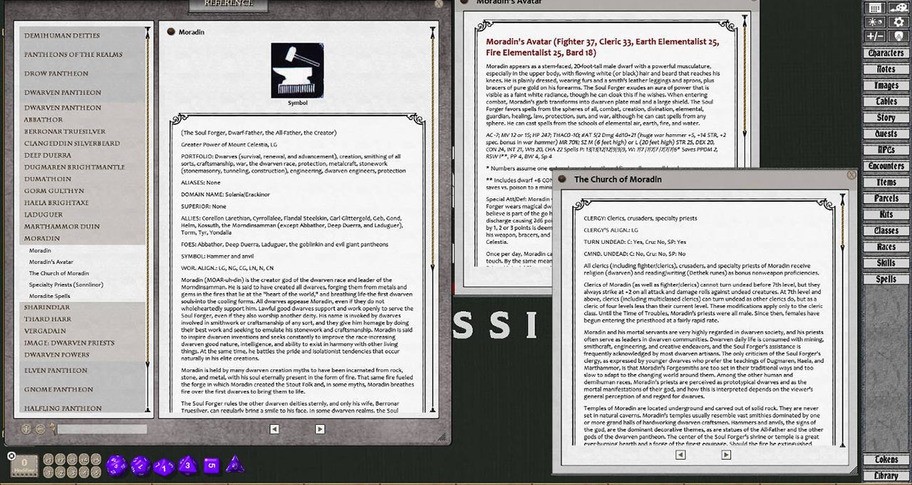 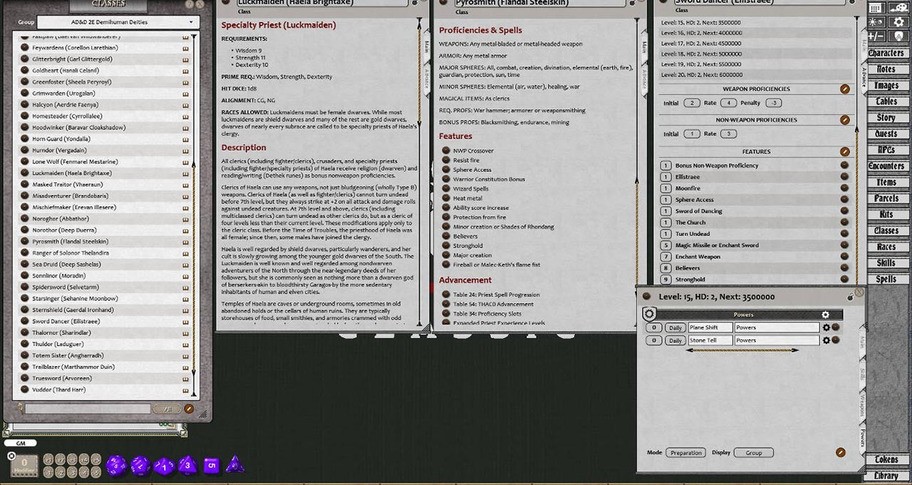 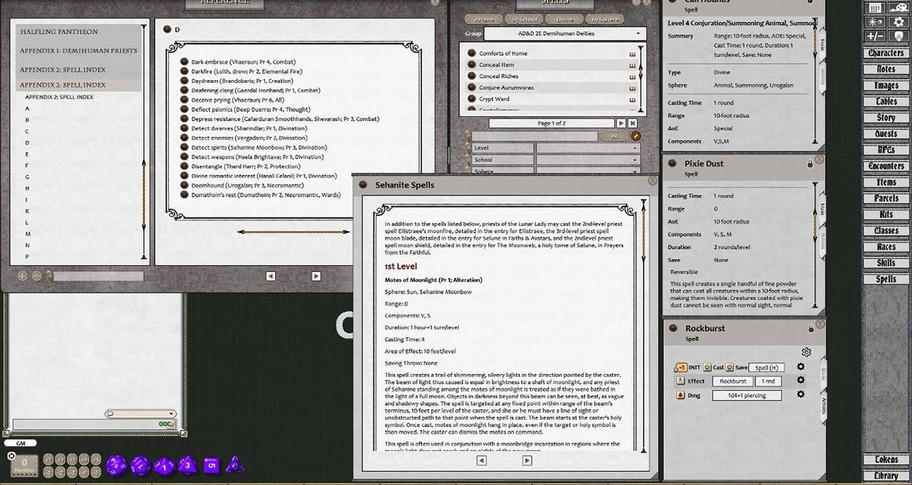 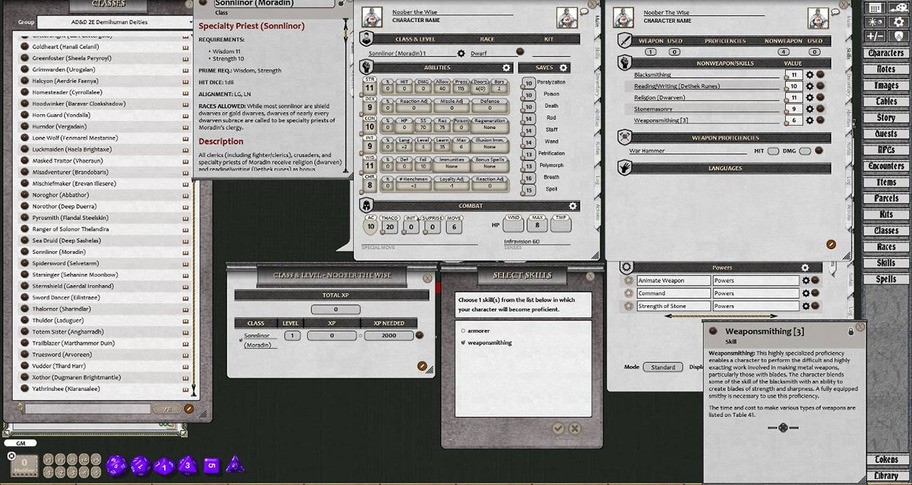 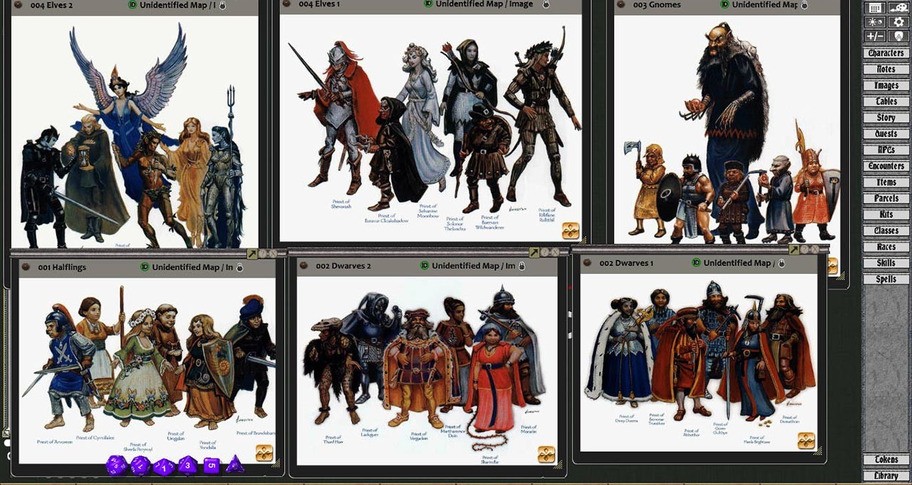 This essential supplement is a companion to Faiths & Avatars and Powers & Pantheons, which detailed the rules by which deities function in the Realms.

Demihuman Deities describes the demihuman relgions and powers of the Realms: those of the elves (including the drow), the dwarves, the gnomes and the halflings. Each entry includes information about a deity's appearance, personality, worshipers, portfolio, aliases, domain name, superior, allies, foes, symbol, worshipers' alignments, avatar, manifestations, church, and specialty priests.

The information on these faiths includes their core dogma, day-to-day activities of priests, holy days and important ceremonies, major centers of worship, affiliated orders, and the priestly vestaments and adventuring garb of members of the clergy.

Finally, each entry contains spells specific to each of the faiths.


To use this product, ownership of Faiths & Avatars is recommended but not required.

Demihuman Deities(1998), by Eric L. Boyd, is the third deity book for the Forgotten Realms. It was published in November 1998.

Origins (I): Yet More Realms Deities. Faiths & Avatars(1996) detailed the majority of the major deities from the Realms, then Powers & Pantheons(1997) delved into demipowers and more far-flung faiths. So what do you do as an encore? The series returned with Demihuman Deities(1998), which reveals the pantheons for the drow, dwarves, elves, gnomes, and halflings.

Origins (II): A History of Demihuman Deities. Demihuman deities didn't get any love in Supplement IV: Gods, Demi-Gods & Heroes(1976). That changed with D&D's first adventures: the Elder Elemental God of the drow was first mentioned in the "G" adventures (1978), then Lolth was similarly referenced in the "D" adventures (1978), before actually appearing in Q1: "Queen of the Demonweb Pits" (1980).

The deific floodgates broke in Advanced Dungeons & Dragons's Deities & Demigods(1980), which revealed numerous nonhuman deities for the first time ever. This included many evil humanoid's gods and revisited the drow's Lolth. Lawrence Schick also introduced several gods for the more socially acceptable demihuman races, including: the dwarves' Moradin; the elves' Correlon Larethian, Deep Sashelas, and Rillifane Rallathil; the gnomes' Garl Glittergold; and the halflings' Yondalla. Roger E. Moore then followed up with a pivotal series of articles running from Dragon #58(February 1982) to Dragon #63(July 1982), each of which investigated the "point of view" of a demihuman or humanoid race, then examined their gods as well. Moore's deity lists were muchexpansive than the Schick originals, usually adding four to six deities for each race.

In the AD&D 2e era (1989-2000), Legends & Lore(1990) omitted all the nonhuman deities, but supplements quickly made up for that lack. FR11: "Dwarves Deep" (1990) revealed the dwarf deities for the Realms, many of whom derived directly from Schick and Moore's work, though Greenwood supplied some of his own as well. Greenwood similarly created a few new drow deities for FOR2: The Drow of the Underdark(1991). However, the avatar rules were changing rapidly in those early days of AD&D 2e, so these supplements' crunch would soon be outdated by the upcoming biggest-ever look at nonhuman deities.

That was Carl Sargent's DMGR4: Monster Mythology(1992), which featured about 25 pages of demihuman deities (and many more monstrous nonhumans). Once again, Schick and Moore were the major sources, but Sargent also offered several demihuman newcomers. There was one more Realms racial splatbook of note, FOR5: Elves of Evermeet(1994). However, it largely revisited known deities from Monster Mythology, and its new deities were considered problematic enough that most were retconned in this volume.

Monster Mythology's25 pages remained the main reference for demihuman deities for the four years, until Demihuman Deitiessaw another vast expansion ...

NPCs of Note. Though this is a Realms deities manual, many of the featured characters have a longer history.

In other words, about half of the Realms demihuman deities were created by Lawrence Schick and Roger E. Moore five to seven years before the Forgotten Realms became an official AD&D setting! In fact, these two sources provided the exact lists of demihuman gods found in the original Forgotten Realms Campaign Set(1987).

Some of these deities had interesting antecedents: Sehanine Moonbow had been off-handedly mentioned in PHBR8: The Complete Book of Elves(1992) and Urogalan had been alluded to in both "The Gods of the Halflings" from Dragon #59March 1982) and Unearthed Arcana(1985); obviously, Sargent had been working hard to be inclusive! Meanwhile, Kiaransalee would go on to fame as the killer of Orcus in Planes of Chaos(1994)

About the Creators. Every major roleplaying book by software engineer Eric L. Boyd has been for the Forgotten Realms. He got his start two years earlier with Faith & Avatars(1996) and Volo's Guide to All Things Magical(1996) and was now finishing out his deity trilogy

Requires: An active subscription or a one time purchase of a Fantasy Grounds Full or Ultimate license and the included 2E ruleset.

Pathfinder: Kingmaker - Enhanced Plus Edition
From $12.99

GG.deals aggregates game keys from over 40 digital distribution stores so you can find the best deals on video games. All offers already include discounts from vouchers to save you time and money. Check the price history of the game to determine how good the deal is in relation to historical low offers. If the price is still too high, create a price alert and receive an email notification when Fantasy Grounds - D&D Classics: Demihuman Deities (2E) matches your budget!

We always try to make sure that price displayed in our comparison is assigned to the correct regions. However, some shops don’t share information regarding regional locks in their product feeds and that can lead to some very occasional mistakes. Before you buy Fantasy Grounds - D&D Classics: Demihuman Deities (2E), please check the store page for any information about activation restrictions in your region. If you notice any product assigned to incorrect region on GG.deals, contact us and we will correct the listing as soon as possible.

If you’re short on money and want to get Fantasy Grounds - D&D Classics: Demihuman Deities (2E) for free, there are a couple of ways for you to try:

Even if Fantasy Grounds - D&D Classics: Demihuman Deities (2E) free download is not available, you can always save up and get the key at the lowest possible price using GG.deals comparison engine.