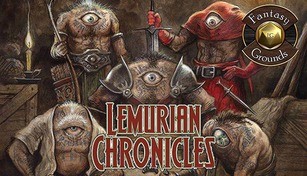 Compare prices with GG.deals to find the cheapest cd key for Fantasy Grounds - Lemurian Chronicles PC. Head over to one of the trusted game stores from our price comparison and buy cd key at the lowest price. Use the indicated client to activate key and download and play your game. 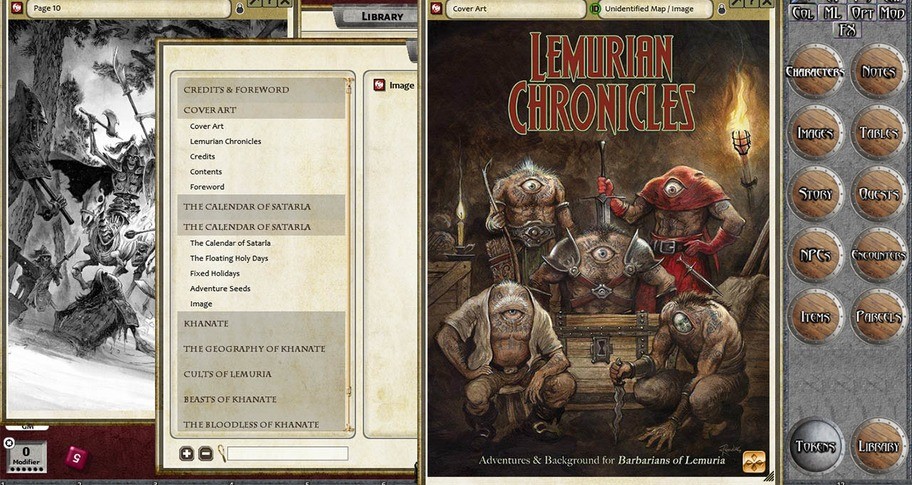 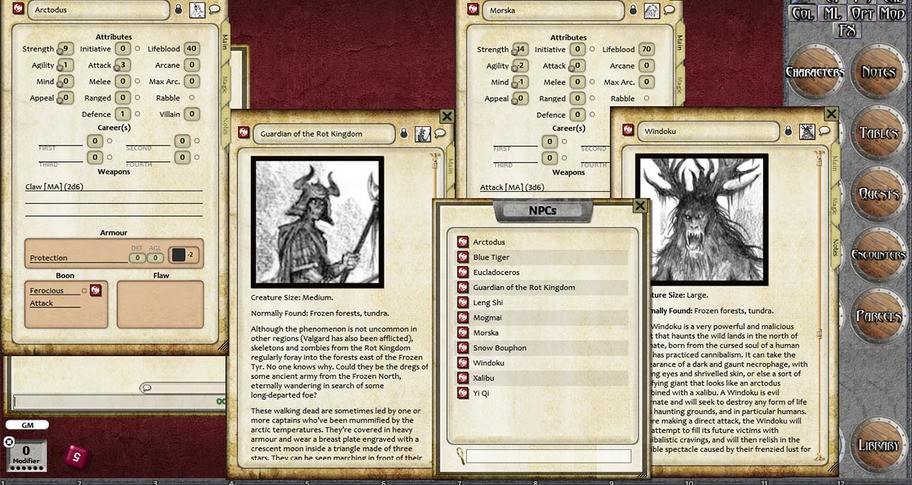 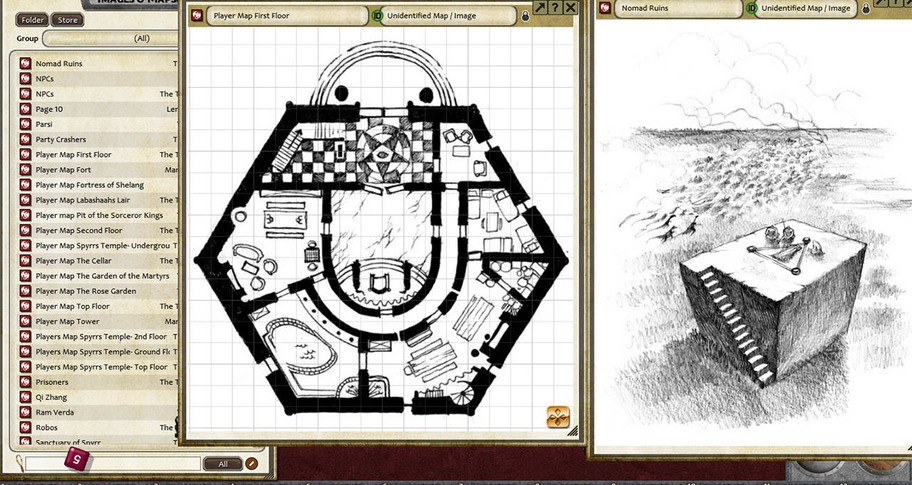 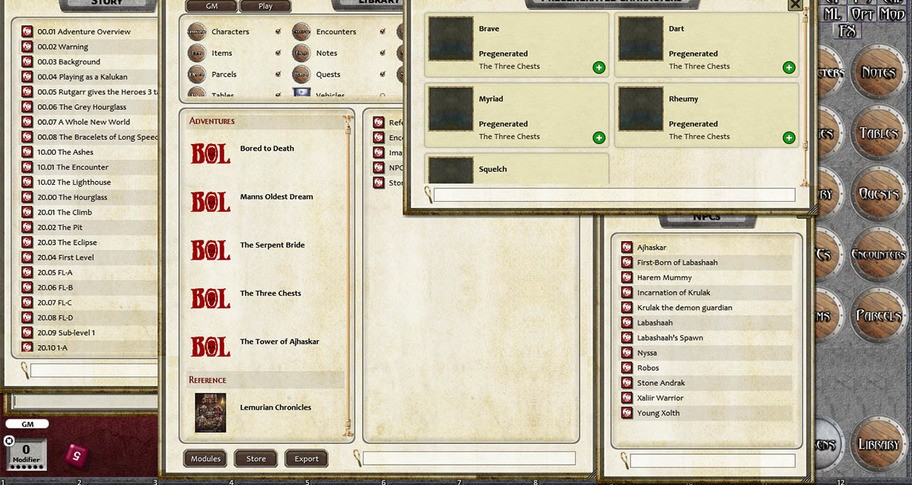 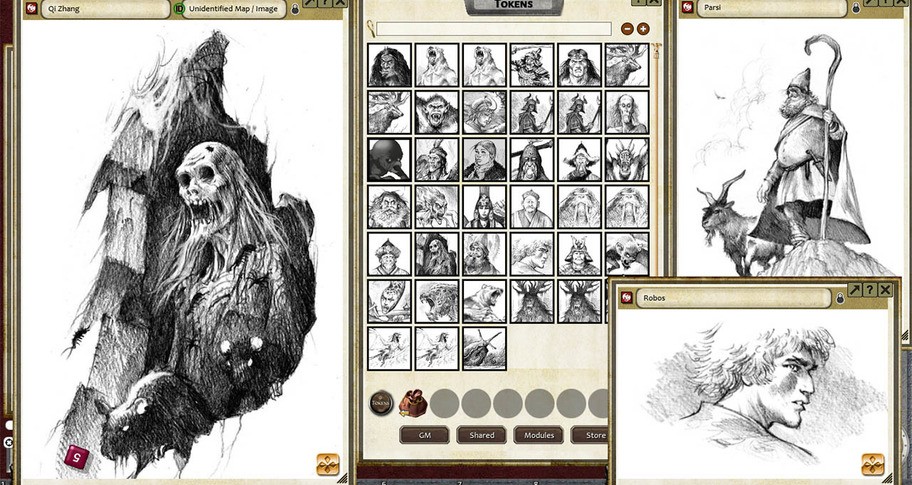 Adventures for Barbarian of Lemuria

Escape from boredom during a fatal stopover on the Island of Shelang,
follow in the footsteps of an old dreamer and his Marvel,
let your heart be your guide to the sanctuary of the Shanis,
track down the wizard Ajhaskar and unravel his dark secrets,
and don't forget to keep an eye on the three chests.

In Lemuria, there's always a treasure to steer clear of, a damsel to overlook and a sorcerer to rescue!

Lemurian Chronicles gives you additional background information and five new ready-to-play adventures, including one designed to be played by a group of Kalukan Heroes!

Here's what you'll find inside:

Bore to Death: On their way to Liu, the Heroes get stuck on the Island of Shelang when early winter storms prolong their stopover. After taking up lodgings in the fortress that broods over the small, wind-swept isle, they quickly find themselves overrun by nasty zombies with pierced foreheads. The lady of the keep has decided to spice up her humdrum existence by dabbling in necromancy! Will the Heroes manage to root out the Bloodless sorcerer that has been walled-up in the deepest chamber of the daunting edifice, and who has been whispering impious spells in the ear of the deranged lady? Or will the entire island become a horrific bloodbath?

M?nn's Oldest Dream: Our Heroes are preparing to settle into their winter quarters in a small Valgardian village at the foot of the Axos Mountains when the unexpected arrival of a young woman, Joanna M?nn, upsets their plans. A tribe of Winged Men has attacked the small mountain fort where she lives with her uncle, forcing her to flee. Joanna is looking for a few brave souls to escort her back up the mountain to learn her uncle's fate. The Heroes will soon discover the eldritch obsessions of old Zacharias M?nn and his niece, and have to deal with the (justified) hostility of the Winged Men of Axos.

The Serpent Bride: The Heroes have been invited by Turmar Latia to celebrate his marriage to the ravishing Jil Sendak, a young heiress from one of the noblest families in Satarla. But his fianc?e is secretly in love with Eormo, a dashing sky-pilot from a poor jungle tribe. Eormo decides to throw caution to the wind and listen to his heart: following the customs of his people, he kidnaps Jil just before the ceremony as the stunned guests look on in disbelief. Our Heroes will be asked to hunt down the fugitives, who've fled to Eormo's tribal village. They'll soon discover the bizarre wedding rites of the jungle people, who are ruled by a creature that is even more bizarre...and much deadlier than they could've ever imagined.

The Tower of Ajhaskar: The wizard Ajhaskar, trusted advisor to King Colmus of Lysor, has not shown his face at court for many days. Servants were dispatched to his tower with a royal summons, but once they passed through the wizard's front door...they never returned. The Heroes are "asked" (or you might say "forced") to enter the feared magician's lair to find out what happened to him. But they'll soon discover that the mysterious tower is only the beginning of their adventure...

The Three Chests: A detachment of Kalukan Sentinels belonging to the Witch Queen have been sent to Halakh on a temporary assignment to serve Rutgarr, a Grey Druid from the Cult of Nemmereth. He orders them to deliver three chests to mysterious destinations without bothering to explain why. It's only at the climax of the adventure that the Heroes will learn the terrible truth: Rutgarr is in fact the sworn enemy of their queen, and he's manipulated the unwitting Kalukan to recover a magic artefact which, once in his possession, may lead to the downfall of Methyn Sarr, the Witch Queen of the Fire Coast.

Pathfinder: Kingmaker - Enhanced Plus Edition
From $16.79

Fantasy Grounds - Lemurian Chronicles sale & discount - all in one place!

GG.deals aggregates game keys from over 40 digital distribution stores so you can find the best deals on video games. All offers already include discounts from vouchers to save you time and money. Check the price history of the game to determine how good the deal is in relation to historical low offers. If the price is still too high, create a price alert and receive an email notification when Fantasy Grounds - Lemurian Chronicles matches your budget!

We always try to make sure that price displayed in our comparison is assigned to the correct regions. However, some shops don’t share information regarding regional locks in their product feeds and that can lead to some very occasional mistakes. Before you buy Fantasy Grounds - Lemurian Chronicles, please check the store page for any information about activation restrictions in your region. If you notice any product assigned to incorrect region on GG.deals, contact us and we will correct the listing as soon as possible.

Will I be able to download Fantasy Grounds - Lemurian Chronicles game immediately?

If you’re short on money and want to get Fantasy Grounds - Lemurian Chronicles for free, there are a couple of ways for you to try:

Even if Fantasy Grounds - Lemurian Chronicles free download is not available, you can always save up and get the key at the lowest possible price using GG.deals comparison engine.

Which Fantasy Grounds - Lemurian Chronicles shop to choose? What’s the difference between official stores and keyshops?