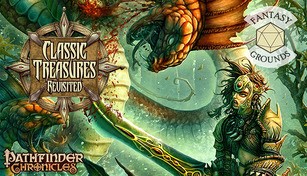 Compare prices with GG.deals to find the cheapest cd key for Fantasy Grounds - Pathfinder RPG - Chronicles: Classic Treasures Revisited PC. Head over to one of the trusted game stores from our price comparison and buy cd key at the best price. Use the indicated client to activate key and download and play your game. 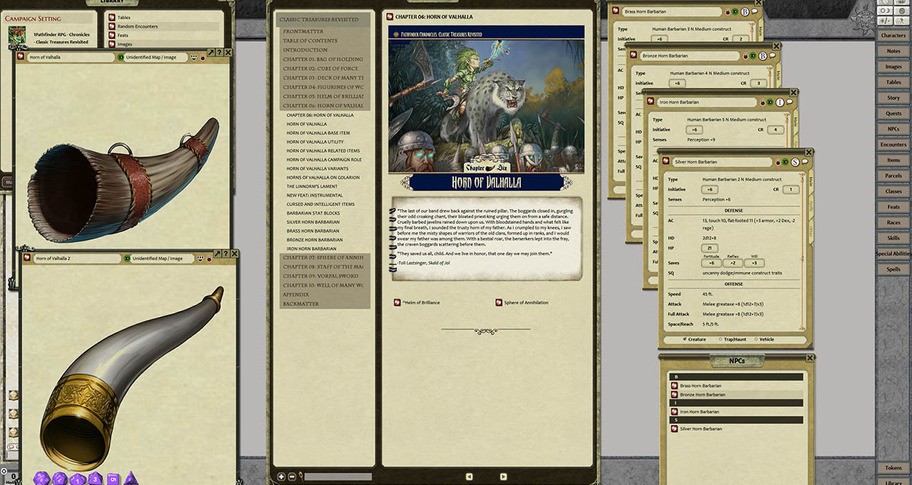 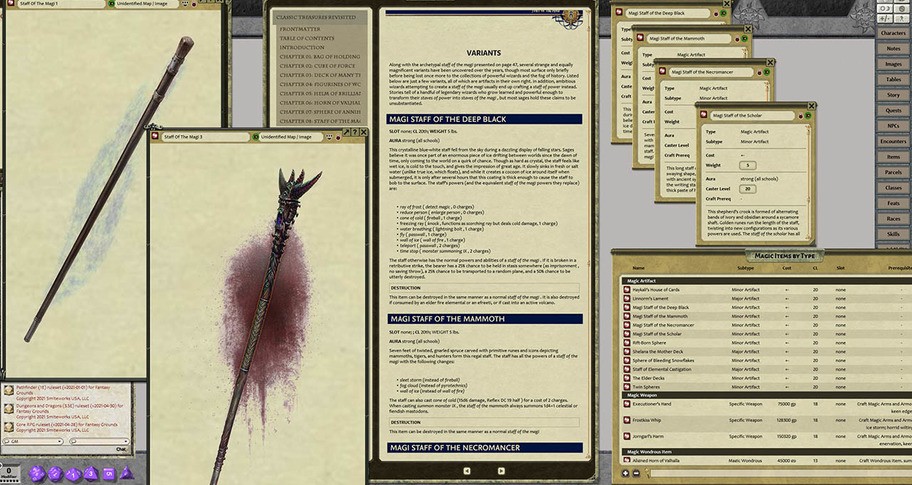 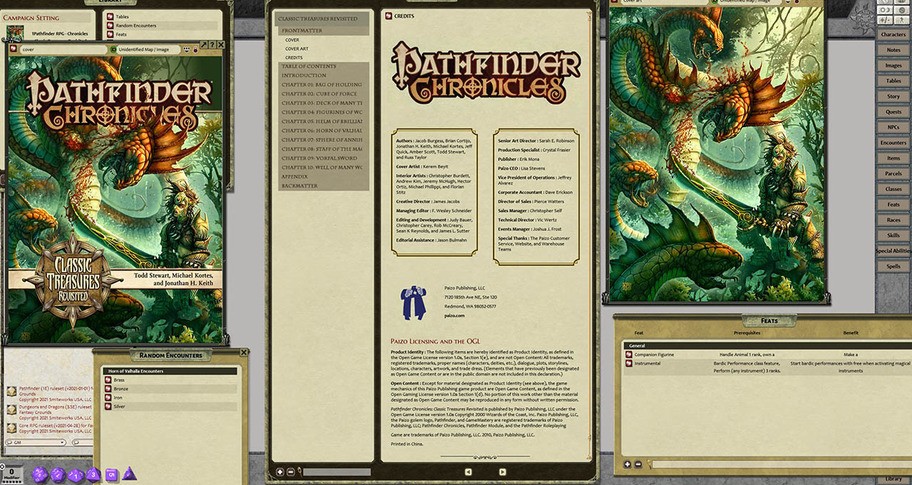 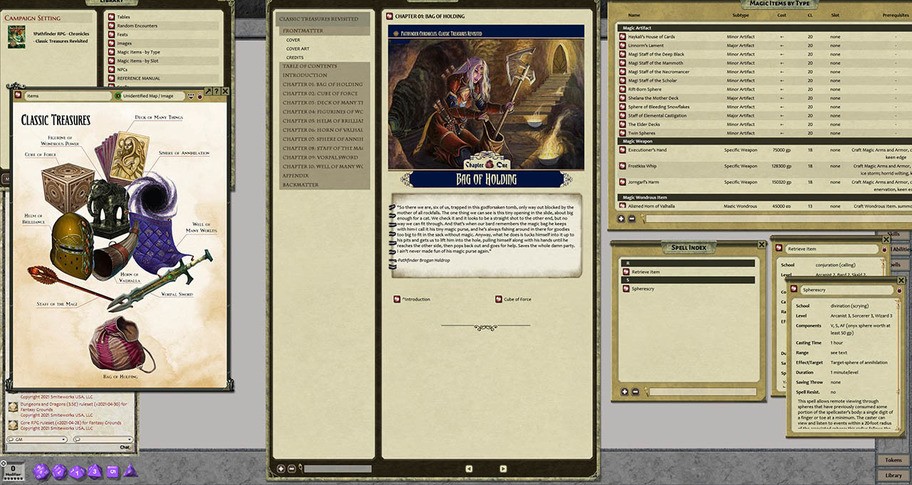 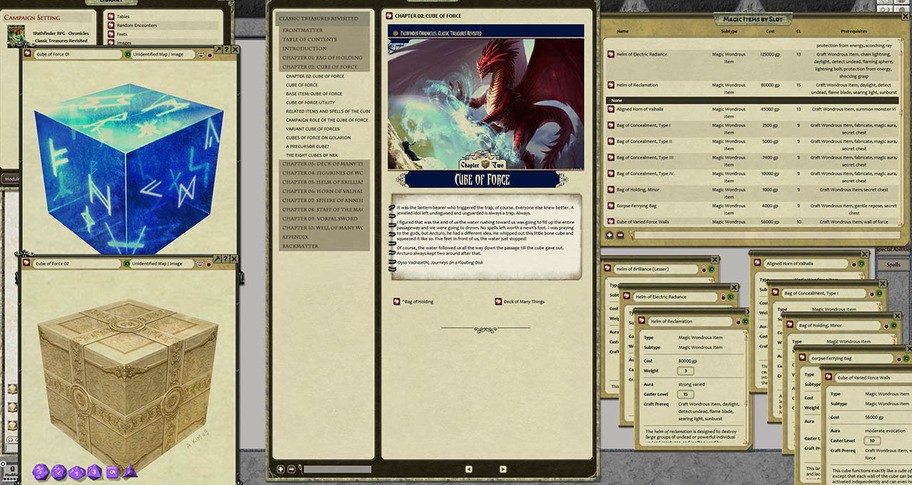 The Ultimate Reward
Every adventurer dreams of glittering treasures and magical relics, and such remarkable rewards spur the quests and ignite the imaginations of history's greatest heroes, driving them to greatness--or their doom. Yet above coins of gold and gem-studded baubles rise those riches that are themselves the envy of kings, the causes of calamities, and the stuff of legends. With the power to slay titanic beasts, reduce whole castles to ruin, and change the flow of fate, such mythic items fill the stories of sages and treasure seekers the world over. And now, the greatest of these wonders rest within your hands.
This compendium of curiosities reveals the magic and legacy of 10 of the most famous and infamous items and artifacts in the history of fantasy roleplaying. From the head-slicing swipes of the vorpal sword to the awesome magical might of the staff of the magi, the depthless bag of holding to the world-warping deck of many things, the investigations within reveal the mysterious creations, cunning uses, magical variations, and untold other secrets of these ultimate treasures.
No matter the campaign setting, Classic Treasures Revisited unleashes a hoard of history's greatest magic items upon your game--along with all the adventures they inspire--and proves that true treasures never tarnish.
Highlighted treasures include:
This Pathfinder Chronicles book works best with the Pathfinder Roleplaying Game Core Rulebook and the Pathfinder Roleplaying Game Bestiary . Although it is suitable for play in any fantasy world, it is optimized for use in the Pathfinder Chronicles campaign setting.
This product is not a PDF or accessible outside of Fantasy Grounds. It has been lovingly converted for use within Fantasy Grounds and features the following additions:
Adapted for Fantasy Grounds by: Wayne Arsenault

For The King
Subscriptions:  EA Play, EA Play Pro
From $5.79

GG.deals aggregates game keys from over 40 digital distribution stores so you can find the best deals on video games. All offers already include discounts from vouchers to save you time and money. Check the price history of the game to determine how good the deal is in relation to historical low offers. If the price is still too high, create a price alert and receive an email notification when Fantasy Grounds - Pathfinder RPG - Chronicles: Classic Treasures Revisited matches your budget!

We always try to make sure that price displayed in our comparison is assigned to the correct regions. However, some shops don’t share information regarding regional locks in their product feeds and that can lead to some very occasional mistakes. Before you buy Fantasy Grounds - Pathfinder RPG - Chronicles: Classic Treasures Revisited, please check the store page for any information about activation restrictions in your region. If you notice any product assigned to incorrect region on GG.deals, contact us and we will correct the listing as soon as possible.

If you’re short on money and want to get Fantasy Grounds - Pathfinder RPG - Chronicles: Classic Treasures Revisited for free, there are a couple of ways for you to try:

Even if Fantasy Grounds - Pathfinder RPG - Chronicles: Classic Treasures Revisited free download is not available, you can always save up and get the key at the lowest possible price using GG.deals comparison engine.