Compare prices with GG.deals to find the cheapest cd key for Strategic Mind: Spirit of Liberty PC. Head over to one of the trusted game stores from our price comparison and buy cd key at the lowest price. Use the indicated client to activate key and download and play your game.

About Strategic Mind: Spirit of Liberty 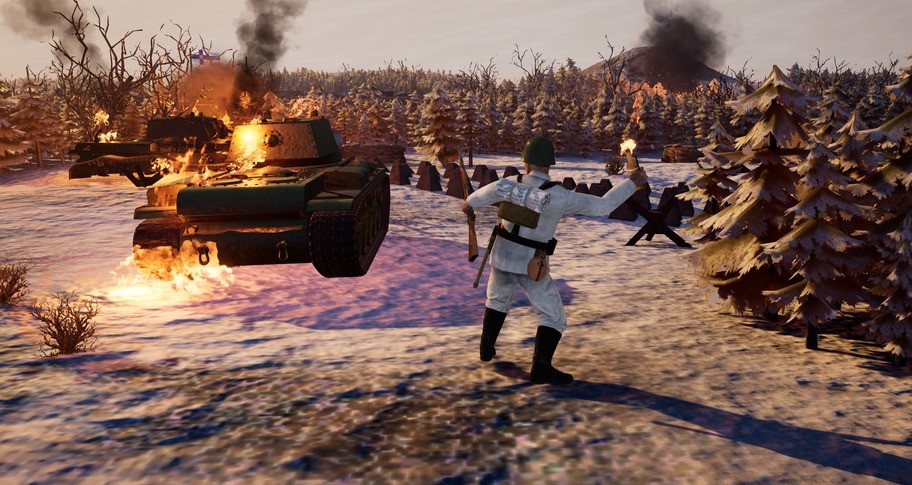 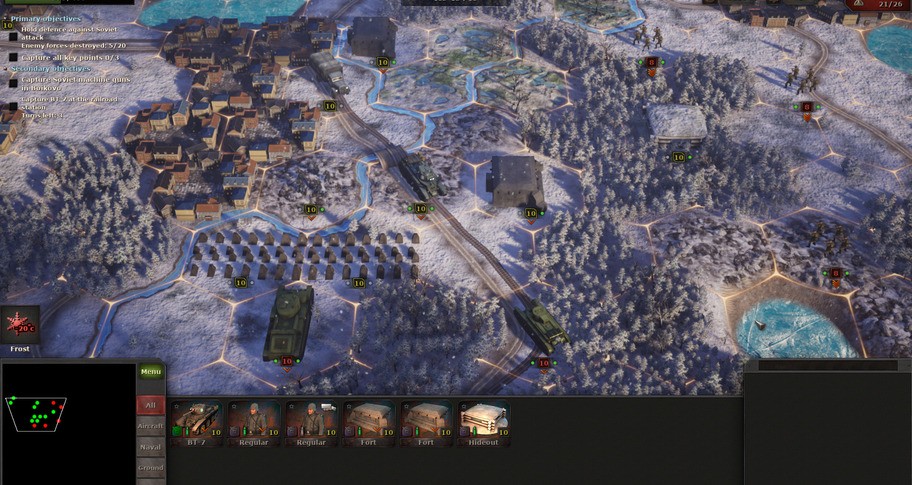 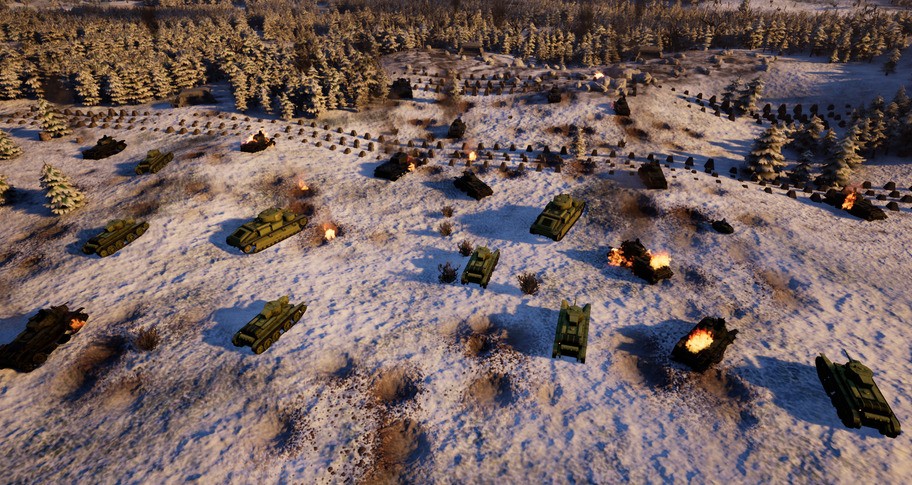 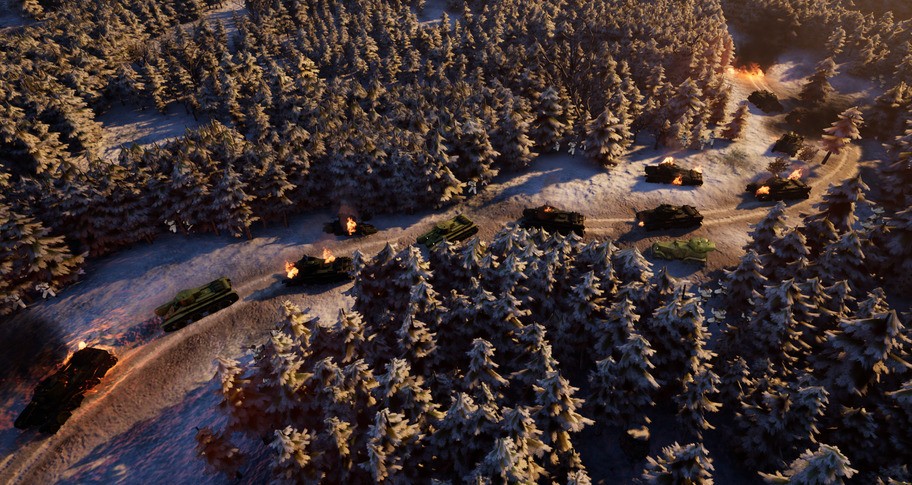 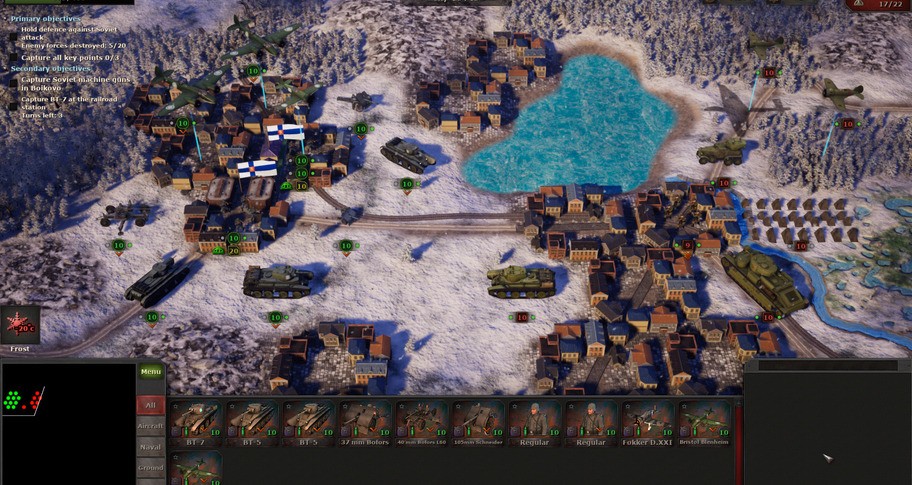 A story from the legends, but in real history

Winter War: over 500,000 Soviet soldiers attack Finland, a country with a population of 3,700,000, and the Finns drive them back, inflicting 5 times their own casualties. Continuation War: the Reds return with a total strength of 1,500,000 - almost half of the entire Finnish population - and the Finns stop them again. Finland’s survival in these two brutal wars against an enemy so vast was a true historical miracle. A miracle of heroism and valor. A miracle of the Finnish spirit of liberty.

“Fortifications, artillery, and foreign aid will be of no value unless the ordinary soldier knows that he is defending his country.” (c) Baron Carl Gustaf Emil Mannerheim

You are the commander of the scarce Finnish troops. Your only goal - to save your homeland and your people from total annihilation.

Would you risk losing your experienced troops to try and capture the enemy tanks?

Would you try to save the stragglers during the retreat and risk losing everyone, or cut your losses and establish a new line of defense?

Would you agree to negotiate with the Soviets that had treacherously attacked you twice before?

“In war the psychological factors are often the decisive ones. An adversary who feels inferior is in reality so.” (c) Baron Carl Gustaf Emil Mannerheim

Play two campaigns: historical and “what if”

Historical campaign
Play through a number of missions throughout the 1939-1945 timeline, spanning three wars: Winter War, Continuation War, and Lapland War. The historical campaign will have smaller-scale but action-packed operations, covering all of the iconic historical battles.

Alternate history campaign
Play a shorter campaign with larger operations, centered around the “what if” events. Help the Germans take Leningrad, cut off the allied aid shipments to USSR by taking the port of Murmansk - that is only the beginning.

Immerse yourself into the (hi)story-driven gameplay

Primary and secondary objectives
Complete numerous objectives grounded in history and narrated by a number of historical characters.

Cinematics before and after each operation
Watch history unfold through the eyes of the key historical figures of the time - over 60 minutes of in-game cinematics with characters such as Baron Carl Gustaf Emil Mannerheim, Risto Heikki Ryti, and others.

Create and grow the army of your own design

Variety is the spice of war
The Finns had only 12 Vickers British tanks in 1939 against up to 6000 Soviet tanks. Even the odds by getting units from various other countries, and shape your rag-tag forces into a well-oiled war machine.

Trophies for everyone!
Where Finnish production is struggling to catch up, make up for it by taking advanced equipment from the enemy. Turn the Soviet guns against their creators.

Upgrade your units to newer models
Make sure your forces are always up to date and up to the task. New models become available at historically accurate points in time.

Train your troops and choose equipment

Use transport vehicles
In the harsh Finnish winter, speed may be the difference between life and death. Provide your units with vehicles to improve their mobility, or have your Infantry use skis to outmaneuver the enemy in winter operations.

Assign historical heroes to your units

Unique heroes system
Every unit in your army could meet certain high requirements to generate a historical personality - a hero with a unique set of powerful skills.

Manage your Headquarters between the operations

Learn Headquarters skills
Choose in which direction your HQ staff will improve as the campaign progresses. Your decisions will result in new passive and active abilities for various units: your artillery could fire twice per turn, or you could call in the air reconnaissance to get better intel on the enemy positions.

Get promotions and awards
Every operation is an opportunity to get new ranks and awards, increasing your Command points, which are used to activate your Headquarters skills and deploy more units.

Confer with your staff
Consult other high-ranking officers for their opinion on the upcoming battle, and get useful advice.

Use elaborate combat mechanics to overcome any foe

Manage Lethal vs Nonlethal damage
There are two types of damage: lethal and nonlethal. Dealing nonlethal damage to your enemies will make them surrender. Different units are prone to deal either lethal or nonlethal.

Use terrain differences to your advantage
Tanks are vulnerable in difficult terrain and cities, while Infantry can occupy buildings or hide in the forests to gain large defensive bonuses. All units suffer large penalties in swamps or while crossing a river, etc. Be aware of your surroundings, and use them to your advantage.

Activate various skills and equipment
Use incendiary or subcaliber shells to maximize your damage to the enemy. Order forced march in the most desperate situations. Employ aerobatics to increase your air force efficiency. Use your HQ skills to affect the entire battlefield.

Use a complex spotting system that represents the importance of reconnaissance
Call upon the air and ground reconnaissance to gather intel about the enemy before ordering your troops forward. No one likes to be ambushed.

Adapt to various battlefield conditions
There is a day-night cycle in the game as well as weather types such as frost or rain. All of these conditions impose penalties that must be countered with special equipment and skills. The finest of your troops may even use such conditions to their advantage. Use the cover of the night to sneak up on the enemy, or strike when the foe is freezing and immobilized.

Utilize the most advanced supply and infrastructure system in the genre

Ammunition and fuel
All units have limited ammo and fuel. Without ammo, your units cannot fight, and without fuel, your vehicles cannot move - and any aircraft will simply crash.

Supply hubs
Generate supplies and transfer them to your troops throughout an entire system, like a heart pumping blood through veins.

Airfield
Allows aircraft units to land for refuelling, repairs, and refit of equipment. Damage to the airfield would also damage all landed aircraft.

Seaport
Allows resupply and change of equipment for naval units. It also generates supplies, if there is a maritime hub nearby and the Seaport is not under enemy blockade.

Damage the infrastructure
All infrastructure facilities can be disabled if their HP drops to 50% or lower. It will then gradually regain its HP and its functionality. Strike at the enemy facilities to prevent them from resupplying.

Cut off the enemy supply lines
All infrastructure facilities are considered connected if a simple truck vehicle could move between them in one go. If you put your unit between the enemy facilities, it would create a zone of control, and prevent the enemy from transferring supplies. Leave the enemy units without much needed ammunition and fuel, then hunt them down.

Make sure your own units are supplied
There is a limit to how far your supply vehicles can deliver supplies - make sure you take that into account when planning your next offensive.

Strategic Mind: Spirit of Liberty is the fifth installment in the Strategic Mind line of games, featuring Finland in its 3 wars during WW2. It has two campaigns: historical and alternate history one.

Previous titles in the series:

Strategic Mind: Spectre of Communism
From $22.49

Strategic Mind: Spirit of Liberty sale & discount - all in one place!

GG.deals aggregates game keys from over 40 digital distribution stores so you can find the best deals on video games. All offers already include discounts from vouchers to save you time and money. Check the price history of the game to determine how good the deal is in relation to historical low offers. If the price is still too high, create a price alert and receive an email notification when Strategic Mind: Spirit of Liberty matches your budget!

Does Strategic Mind: Spirit of Liberty cd key activate in my region?

We always try to make sure that price displayed in our comparison is assigned to the correct regions. However, some shops don’t share information regarding regional locks in their product feeds and that can lead to some very occasional mistakes. Before you buy Strategic Mind: Spirit of Liberty, please check the store page for any information about activation restrictions in your region. If you notice any product assigned to incorrect region on GG.deals, contact us and we will correct the listing as soon as possible.

Will I be able to download Strategic Mind: Spirit of Liberty game immediately?

If you’re short on money and want to get Strategic Mind: Spirit of Liberty for free, there are a couple of ways for you to try:

Even if Strategic Mind: Spirit of Liberty free download is not available, you can always save up and get the key at the lowest possible price using GG.deals comparison engine.

Which Strategic Mind: Spirit of Liberty shop to choose? What’s the difference between official stores and keyshops?