Buy Trust Me, Not Her PC

Compare prices with GG.deals to find the cheapest cd key for Trust Me, Not Her PC. Head over to one of the trusted game stores from our price comparison and buy cd key at the best price. Use the indicated client to activate key and download and play your game.

About Trust Me, Not Her 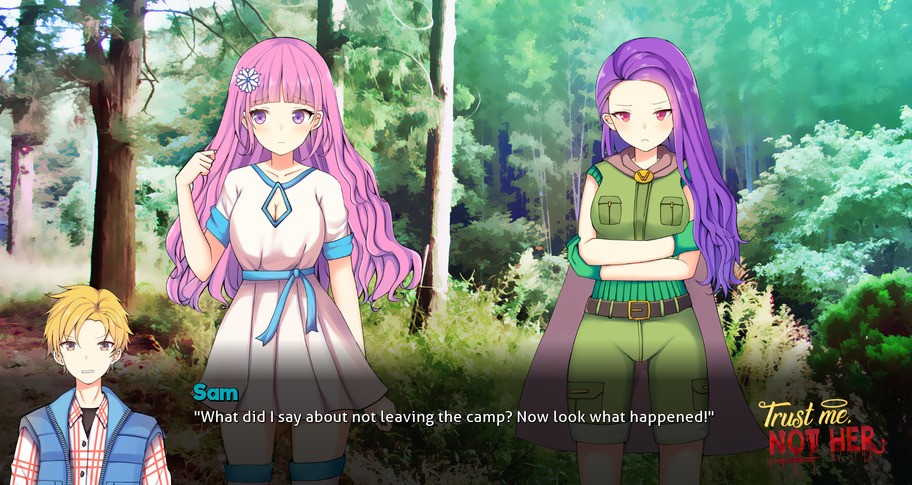 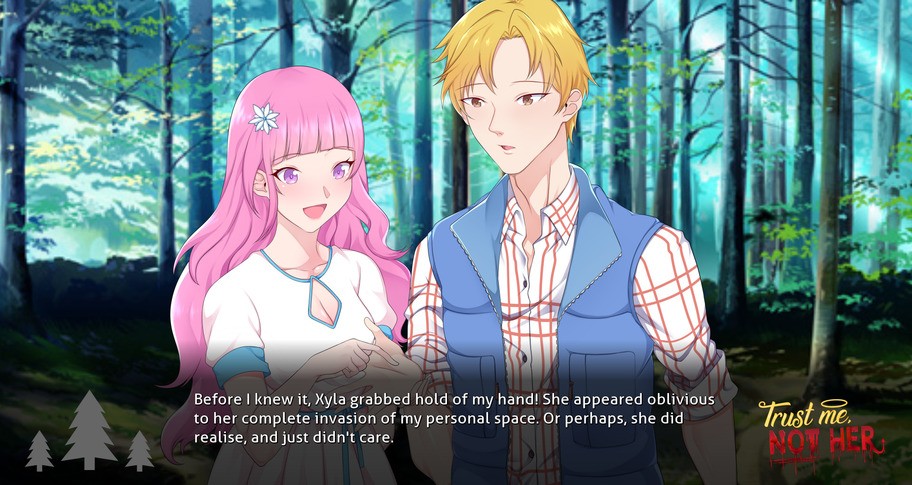 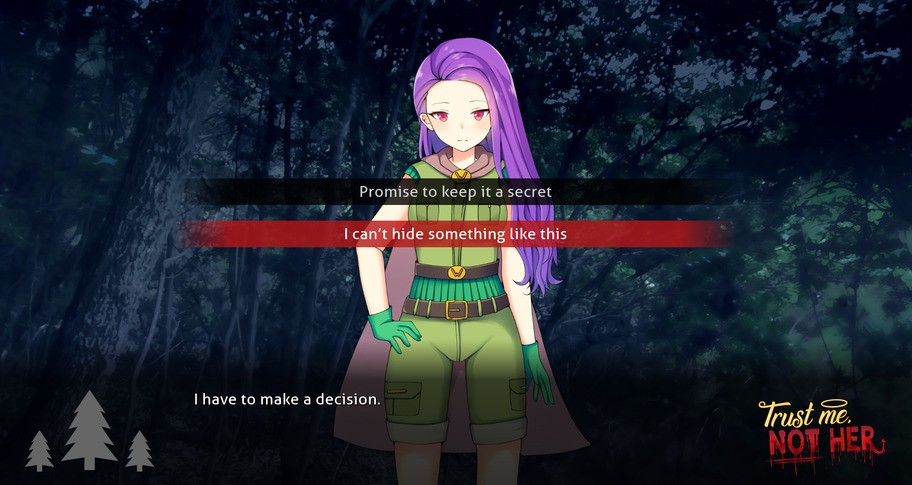 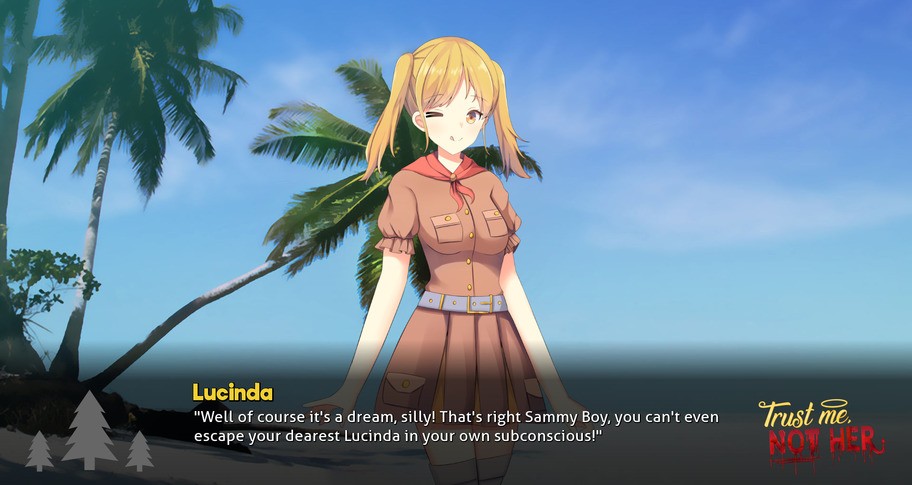 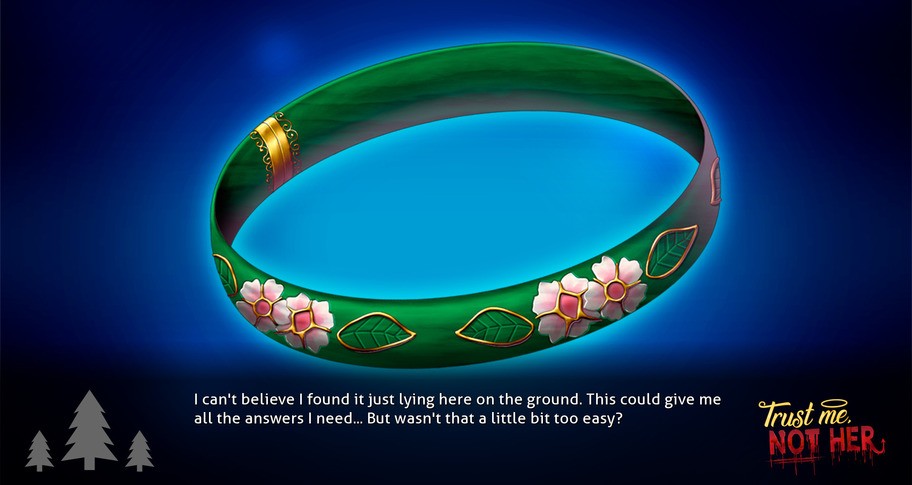 Trust Me, Not Her is an upcoming, suspense visual novel about Love, Friendship... and MURDER!

In the twisted labyrinth known as Gloomdale Forest, a vast and ancient woodland, many souls are said to have disappeared without a trace.
Our protagonist Sam, in a search for a missing friend, travels deep into its heart in an effort to uncover the secrets that lie within.
He is aided by his newfound companion, Lucinda, a girl whose navigation skills prove vital.

But when she suddenly vanishes one night, Sam is left unnerved, disoriented, and alone. Just as hope seems lost, he encounters two mysterious maidens: Xyla, and shortly after, Willow. Both girls disbelieve each other's seemingly innocent reason for being in the forest and compete for his trust. Dark events soon unfold that lead Sam to have no doubt, that one of them is lying and must be responsible for the absence of Lucinda, and possibly others.

Control your Fate
With danger lurking, you will be faced with making many intense decisions that will shape the destiny of not just Sam, but the girls as well. Choose wisely!

Branching Story
Play through a grand total of 10 different endings, each with highly varying consequences. What will be the outcome of your choices? Justice...True Love...Or something more sinister?

ImpactfulVoice-Over and Powerful Soundtrack
Trust Me, Not Her offers a captivating audio experience, with an English Voice Cast to bring emotion to the characters, as well as a magnificent​Soundtrack, featuring pieces by HMN Music.

Wishlist 'Trust Me, Not Her' today... Who will you trust?

Price History of Trust Me, Not Her

Trust Me, Not Her sale & discount - all in one place!

GG.deals aggregates game keys from over 40 digital distribution stores so you can find the best deals on video games. All offers already include discounts from vouchers to save you time and money. Check the price history of the game to determine how good the deal is in relation to historical low offers. If the price is still too high, create a price alert and receive an email notification when Trust Me, Not Her matches your budget!

Does Trust Me, Not Her cd key activate in my region?

We always try to make sure that price displayed in our comparison is assigned to the correct regions. However, some shops don’t share information regarding regional locks in their product feeds and that can lead to some very occasional mistakes. Before you buy Trust Me, Not Her, please check the store page for any information about activation restrictions in your region. If you notice any product assigned to incorrect region on GG.deals, contact us and we will correct the listing as soon as possible.

Will I be able to download Trust Me, Not Her game immediately?

If you’re short on money and want to get Trust Me, Not Her for free, there are a couple of ways for you to try:

Even if Trust Me, Not Her free download is not available, you can always save up and get the key at the lowest possible price using GG.deals comparison engine.

Which Trust Me, Not Her shop to choose? What’s the difference between official stores and keyshops?