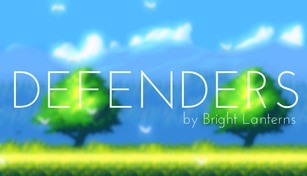 Compare prices with GG.deals to find the cheapest cd key for DEFENDERS PC. Head over to one of the trusted game stores from our price comparison and buy cd key at the best price. Use the indicated client to activate key and download and play your game.

DEFENDERS is a 2D-sidescrolling platformer that is NOT inspired by the games of yore. It's slick, snappy and chock-a-block with fast-paced combat and twitchy platforming﻿﻿. It's the first ever DEFENDERS game, the first game to be set in the FARIA fictional universe and the first game to ever be released by Bright Lanterns! Don't allow your senses to be betrayed by its charming and colourful visuals, however. Nay; you must have your wits about you! For no matter which game mode you choose, whatever ensues will be a manic, unpredictable fight for survival. With two extensive campaigns, each with unique playstyles and a third game mode consisting of an entirely random, procedurally-generated dungeoneering adventure; you are guaranteed an enthralling and exclusive experience every time you boot the game up. Respectively: In the first campaign, you take on the role of Linda Stormhawke. You must hunt down and slay an overly-productive Globin brood-mother. The coast, hills, towns and forests of Port Faria and the Shores of All are practically overrun with the sticky blighters; so following their syrupy trail home into the Tanglewood shouldn't be too hard. But if the Globins have you stuck or the Soltraps have you sapped, enlist the aid of your friend to help or hinder you on your journey! In this campaign, you're the renowned hero Bear Firesong, thrust into the foul pits of Thunderdump Stronghold, in the Itchy-Ditch Swamplands; homeland of the Orcs of Faria. As the Orc-Chieftain Bog-Gob VII threatens another campaign across the freelands of the kingdom, Bear has been granted the opportunity to duel Bog-Gob himself under the condition he is able to survive the chieftain's personal dungeon "Washed-One Grinder". Can you see Bear through to the end so he may take on Bog-Gob? Or will you crumble under the pressure and succumb to the horrors Bog-Gob has prepared for you within the foulest reaches of his domain? Co-op supported, too! Beyond the Earth-Whisper Meadows, through the Starshell Rainforest, past the Silverstream Village of the GuaiGuai tribe and over the Turtle Glades lies a knoll. What was once thought to be an unremarkable knoll has quickly garnered the attention of the DEFENDERS guild. Through a passage burrowed atop this knoll, vast caverns strewn with crumbling ruins have been discovered. But before any eager archaelogist meets an untimely demise in that twisted maze, it's up to you to clear out the abundance of frightful monsters lurking in its wretchedly dark pits. .Stormhawke single-player and co-op campaign that takes you on a lengthy adventure across vast plains, through thick forests and long-forgotten ruins. .Firesong single-player and co-op campaign that sees you tackling different rooms with light puzzle mechanics. Grab the key and get out! Features over 50 hand-crafted levels. .Dungeon Delve single-player only mode, a procedurally-generated dungeoneering affair that sees you descending, floor-by-floor, chamber-by-chamber, collecting as much gold as you can along the way. A random, completely different experience awaits you every time. I wonder... can you reach the 100th chamber? There must be SOMETHING down there! .Twitchy, skillful combat. Switch between your axe and bow effortlessly, dealing with the nefarious hordes of enemies in whichever way you see fit. .A wide range of different enemies will descend upon you not just on foot but from the skies, also. Keeo an eye out for explosive enemies, however! Their destructive tendencies alter the terrain entirely unscriptedly! .Gamepad support! .Catchy music! .It's tougher than a Cuban boxer made of diamond. .Community challenges, complete with cash prizes. .Post-launch support and free content. .A Community-driven fictional universe and lore. Let's build on it together! . A plethora of beautiful trading cards, emoticons and backgrounds to own on Steam. --- Lift your swords. Nock your arrows. And pledge fealty to the DEFENDERS guild, the free-peoples of Faria and the countless hidden treasure chests out there awaiting your plunderous mitts!

DEFENDERS sale & discount - all in one place!

GG.deals aggregates game keys from over 40 digital distribution stores so you can find the best deals on video games. All offers already include discounts from vouchers to save you time and money. Check the price history of the game to determine how good the deal is in relation to historical low offers. If the price is still too high, create a price alert and receive an email notification when DEFENDERS matches your budget!

Does DEFENDERS cd key activate in my region?

We always try to make sure that price displayed in our comparison is assigned to the correct regions. However, some shops don’t share information regarding regional locks in their product feeds and that can lead to some very occasional mistakes. Before you buy DEFENDERS, please check the store page for any information about activation restrictions in your region. If you notice any product assigned to incorrect region on GG.deals, contact us and we will correct the listing as soon as possible.

Will I be able to download DEFENDERS game immediately?

Can I get a free DEFENDERS Steam key? Is there a way to download DEFENDERS for free?

If you’re short on money and want to get DEFENDERS for free, there are a couple of ways for you to try:

Even if DEFENDERS free download is not available, you can always save up and get the key at the lowest possible price using GG.deals comparison engine.

Which DEFENDERS shop to choose? What’s the difference between official stores and keyshops?