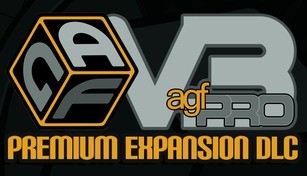 Compare prices with GG.deals to find the cheapest cd key for AGFPPROV3 Premium PC. Head over to one of the trusted game stores from our price comparison and buy cd key at the best price. Use the indicated client to activate key and download and play your game. 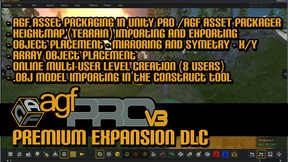 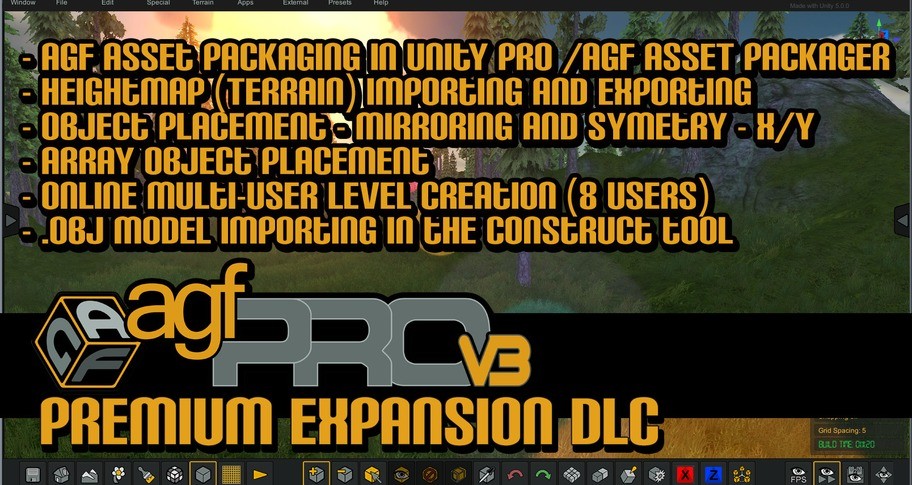 We just released version 3.0 of AGFPRO & Premium - there are a TON of new features, assets and functionality that have been added, giving users the ability to create amazing game levels and maps like NEVER BEFORE!!

Many users ask "why do I need to buy the Premium DLC for AGFPRO" and "what are the key differences"? - The answer is simple - if you are buying AGFPRO as a tool for your game development software pipeline, then yes - you should definitely use the Premium DLC! Premium offers additional features that are not available in the basic version, it expedites the development process exponentially with batch processing, allows for multiplayer co-op development for up to 8 users, provides open source on over 500 assets included, just to name a few of the many and on going benefits! - And the best part... you do NOT need to have UnityPro in order to take advantage of the great features offered in AGFPRO or Premium.

AGFPRO v3.0 is a comprehensive toolset designed to provide game developers and enthusiasts with a powerful and rapid level creation, terrain/vegetation editing, lighting and atmosphere system.

AGF is an independent product that empowers users to create game levels and environments for many types of game genres, and the AGFPRO v3.0 PREMIUM version is also designed to work in concert with the Free and Pro versions of the Unity 5.0 game engine to allow further customization and game publishing. AGF runs on the PC, MAC and LINUX systems.

AGF allows developers to rapidly create game maps, sculpt terrain and design levels quickly and easily. With over 1000+ assets pre-stocked in the warehouse, along with 48 pre-set themes and 8 sample maps, developers and enthusiasts can begin creating levels in minutes. AGFPRO v3.0 includes all of the necessary tools to allow users the ability to import AGF scenes into Unity3d Free and Pro 5.0.

Creating game levels and maps in AGFPRO is easy and fun - now ANYONE can create their own quality game maps without having to program, model or animate!

Please note that in order to use AGFPRO Premium (DLC), you must first purchase AGFPRO.

AGFPRO v3.0 now Features Nine (9) Key Areas or Apps for Development that Include:

AGFPPROV3 Premium sale & discount - all in one place!

GG.deals aggregates game keys from over 40 digital distribution stores so you can find the best deals on video games. All offers already include discounts from vouchers to save you time and money. Check the price history of the game to determine how good the deal is in relation to historical low offers. If the price is still too high, create a price alert and receive an email notification when AGFPPROV3 Premium matches your budget!

Does AGFPPROV3 Premium cd key activate in my region?

We always try to make sure that price displayed in our comparison is assigned to the correct regions. However, some shops don’t share information regarding regional locks in their product feeds and that can lead to some very occasional mistakes. Before you buy AGFPPROV3 Premium, please check the store page for any information about activation restrictions in your region. If you notice any product assigned to incorrect region on GG.deals, contact us and we will correct the listing as soon as possible.

Will I be able to download AGFPPROV3 Premium game immediately?

If you’re short on money and want to get AGFPPROV3 Premium for free, there are a couple of ways for you to try:

Even if AGFPPROV3 Premium free download is not available, you can always save up and get the key at the lowest possible price using GG.deals comparison engine.

Which AGFPPROV3 Premium shop to choose? What’s the difference between official stores and keyshops?